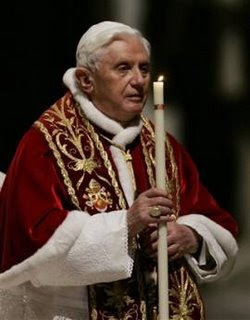 The Brothers of the Little Oratory in San Diego, along with the members of the Chorus Breviarii Gregorian Chant Schola and Liturgical Prayer Group, wish to make the following public statement regarding those liberal churchmen who are currently in open resistance to the program of continuity and church unity undertaken by our Holy Father Pope Benedict XVI:

Healing divisions is a difficult task. People come to like the social security of their ghettos. They fear what lies beyond its walls. Hence the boundaries separating the Roman and Orthodox churches has entrenched itself for nearly a thousand years. Many of us may live to see its millennial anniversary. Preventing the entrenchment of such a division is, to his credit, clearly important to Pope Benedict XVI. And he has made very clear, since the first months of his pontificate, the importance that he sees fit to attach to continuity both in worship and in doctrine. Yet this Pope not only theorizes, he acts - unilaterally and in keeping with his Petrine privilege, much to the displeasure of a dominant liberal faction which seeks and has sought since the Council to monopolize its control of church praxis. But that was not the vision of the Council, nor was it the intention of Pope John XXIII. True evenhandedness takes far more courage than monopoly, and Pope Benedict XVI is demonstrating that courage and being vilified for it by the Church and Social Left. We must and will speak and act in his defense. 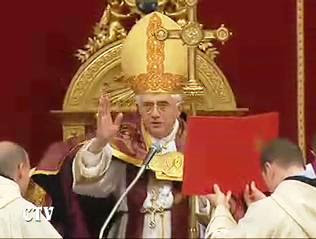 Therefore the Brothers express their undying gratitude to our Holy Father, Pope Benedict XVI for his work to repair decades of driftage and dissolution in the identity of the Catholic faithful. His courageous work has freed the church from the icepack of decadent and monopolistic liberal theology, and is promoting new growth from both the oldest branches of the church, and the youngest. The Barque of Peter is moving once again, as the breath of the Holy Spirit fills her sails. Yet forces within the church work obstinately to obfuscate and obstruct, even threaten, both the Holy Father and his work as the Vicar of Christ. This is occurring both in the religious and secular press, and even among the hierarchies of Western Europe, to their shameless culpability. The statement of the Austrian Bishops was a disgrace.

The Brothers of the Little Oratory in San Diego wish to make it clear that we will be neither silent nor invisible in the face of such disloyal opposition to our Holy Father, Pope Benedict XVI. Most of us have grown up in the era of the dissolution of our Catholic identities, and we have worked from before the beginning of this pontificate, with little encouragement either material or ecclesial, to reclaim it for ourselves through our dedication to the offices of the Roman Breviary both in private and in public, and to an interpretation of the liturgy rooted in the Hermeneutic of Continuity. As laymen we have done work of our own volition that our priests ought to have fostered in us and in themselves all along. Now, for the first time in our adult lives we have a Pope who not only encourages, he acts in our interests. We will act both in his promotion and his defense. 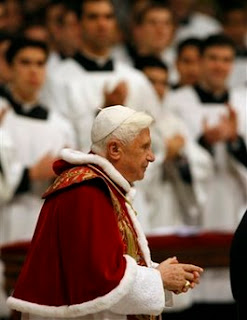 We EXPECT our Diocese to do the same. It is not to its credit that no voice has yet been heard in firm support of the Holy Father while the likes of the Austrian Bishops, the Tablet in London, and Mr. Richard McBrien, Pelosi, Fr. Kennedy in Australia, and Card. Lehmann in Germany resist him to his face. We are seeing with increasing clarity the potential for treachery that they, and their accompanying political slant and vision, bring with them from the depths of the 1960's. REMEMBER: it was THIS Pope who approved the statutes of the Neo-Catechumenal Way; it was THIS Pope who accommodated the State Bishops of the People's Republic of China, and the faithful they mislead; and it is also THIS Pope who seeks to reconcile a group of traditionalists who are more Roman Catholic than either of the other two aforenamed groups.

Should he decide that is possible, then it is not up to the liberal churchmen among us to criticize. It is for them to assent and support our Holy Father. We look eagerly forward to the day when the cracks in the facade of Christianity are healed from the bottom up, not with a superficial bridge of ice which spans the gap but melts when the examining sunlight of doctrine and dogma is shined upon it. But liberal churchmen need to know that such cracks exist on both the left AND the right. And BOTH require the same urgent attention. 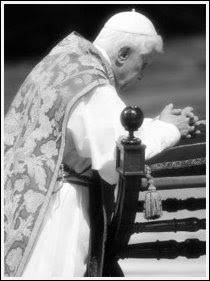 We have suffered patiently the years of the Post-Conciliar "child-church"; we have longed to grow up and to put away the things of childhood and to become Men of faith, yet we have seen our spiritual ambitions repeatedly slapped down over the years. We have turned BOTH cheeks already. We will not be slapped again. And so we say now, before the ecclesial situation develops past the editorial stage: There is ONLY ONE ROCK, and we stand firmly upon it; we stand firmly WITH Peter, with Pope Benedict XVI, if necessary between him and the wolves who would undo him. We will defend him both with prayer AND action, with Faith AND Works. If we, as devoted lay-faithful can be so bold in our support, we have every confidence that our Diocese can do the same. We call on the Diocese of San Diego to stand even before us, in support of the Holy Father and his program of church unity.
Posted by Fratellino at 11:45

I cannot add further to Fratellinos comment, except to say it has my haertiest endoresment, as it should for traditional Catholics everywhere. Especially on or country where we face an increasingly hostile press and governemnt policies as well as betrayed by our own Catholic, and I use that term advisedly, politicians, who so willingly have made friends with mammon.