A Visitor from London Presides at Vespers 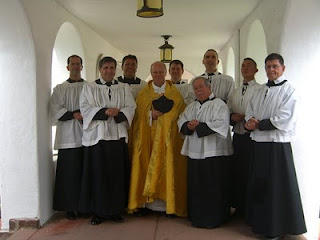 On Sunday, 11 July 2010, the Brothers of the Little Oratory sang Vespers in St. Augustine's Monastery Chapel, with Fr. Christopher Basden as Hebdomadary. Father Basden has for the past fifteen years been pastor of St. Bede's parish, Clapham Park, which is a suburb of London, England, and part of the Archdiocese of Southwark. St. Bede's is a vibrant South London parish, which includes the Traditional mass in its Sunday morning schedule, as well as weekly Vespers, and a daily Extraordinary Form mass in the Lady Chapel. Easily accessible from London's Victoria station, St. Bede's is a "must attend" for American Catholics in London. For more information see their impressive website at: 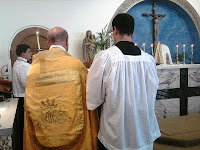 Fr. Basden came to the U.S. on his summer holiday, and made several stops on his tour, including the convent of the Handmaids of Mary at Camarillo, a group of Spanish nursing nuns who have a convent in St. Bede's parish. While there Fr. Basden was able to attend the solemn profession of one of the sisters. 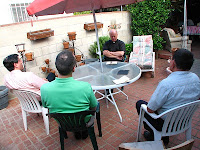 Father then journeyed down from the Los Angeles area, stopping to see the missions at La Purissima, San Buenaventura, San Fernando Rey, San Gabriel, San Juan Capistrano, and San Louis Rey (though not all in one day!). While in San Diego he visited the mission San Diego de Alcala, and said mass at St. Augustine's and Our Lady of Refuge. 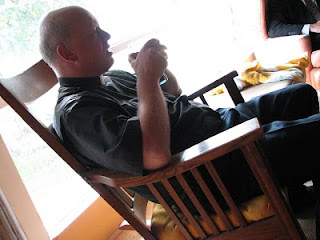 Fr. Basden devoted his last afternoon and evening to the Brothers, singing Vespers and Benediction at St. Augustine's, then retiring to Pacific Beach where he led shortened Oratorian "garden" exercises (as is the custom of the Brothers in summer), joined tbe Brother for tea, offered spiritual counsel in the form of an impromptu "fervorino", and later led traditional Gregorian compline in the house chapel. 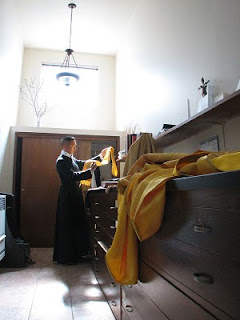 Following his visit to San Diego, Fr. Basden has travelled on to spend a much needed week in retreat with the Benedictines of Clear Creek Monastery in Eastern Oklahoma. The Brothers of the Little Oratory in San Diego hope that his visit to San Diego will be one that Fr. Basden will not soon forget, and one which he will perhaps repeat without extensive delay.
Posted by Fratellino at 19:05