"American Soldier of the Little Oratory" 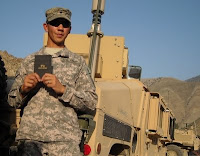 Although on the other side of the globe by distance, and a world away by culture, our Frater Ronaldus is still united with the Brotherhood in San Diego. Ronald is stationed in northeastern Afghanistan (location withheld), serving our country with the U.S. Army fighting in the Global War on Terrorism (GWOT), under command of the First Infantry Division (1st ID).
Afghanistan, almost unanimously Muslim, has sporadic pockets of tribal/animistic religions, a small Hindu population, and a comparable Christian population. Frater Ronald keeps united with the Brothers of the Little Oratory by daily prayer and good works. It may very well be the first time the Oratorian Spiritual Excercises have been prayed in this Islamic Republic, although the Land was under British control from 1839-1919. We’ll leave it to other researchers to see.
Saint Philip Neri, Patron Saint of the U.S. Army, Pray for us and Protect our Troops! HOOAH!
(Frater Ronald is shown in Afghanistan by his Humvee vechicle with his copy of the "Manual of the Little Oratory".)
Posted by Vaticanguard at 22:32

It should be pointed out that the prayer cards used in this year's vespers of All Hallows at St. Anne's Church, San Diego, were heroically typeset in, and mailed from, Afganistan. The work goes on, even in harm's way. God bless, and stay safe, Frater Ronaldus!