The Precious Blood Robes: And Then there were Two! 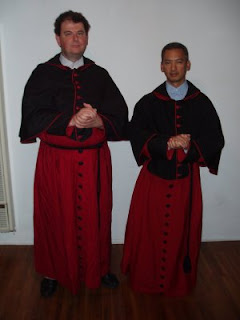 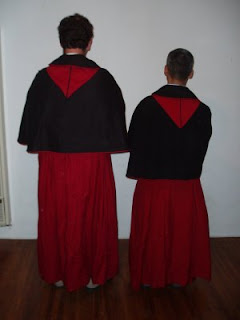 The robes are here modelled by Brother Richard Dawes, and Chorus Breviarii member and Postulant, John T. Velasco. The second robe was made by La Mesa Tailors of Linda Vista, San Diego, Ca., to a pattern by Mrs. Nunzia Pecoraro, wife of George Pecoraro, one of the Brothers. Mrs Pecoraro is a professional costumier, who works for San Diego Opera and the Old Globe Theatre, among others. The Brothers wish to express to Mrs Pecoraro and to La Mesa Tailoring their sincere gratitude for work expertly undertaken, and expertly completed. (Spot the replica!) 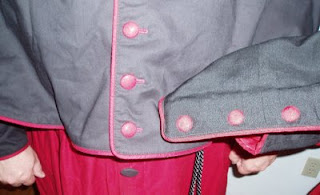 This detail shows the perfectly matched piping, buttons, and the red stitching around the button holes, all evidence of the attention to detail paid to the exact reproduction of the Precious Blood Robe copy (and yes, for those who know, the curious little button at the top of the back, under both the collar and mantle, is duly in place!). A keen eye will notice however, a slight difference in the weave of the two black fabrics. The original robe (right) is wool, which after experimentation proved too hot even for the sub-tropical climate of San Diego. Instead, a double thickness of cotton fabric was used, which achieves a weight and hang similar to the woolens, but provides suitable breathability. 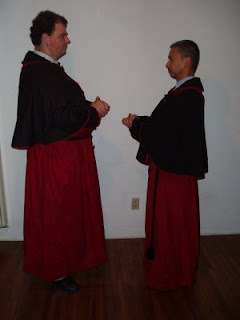 The achievement of the first Precious Blood Robe (in all probability) to be manufactured on this continent in the last hundred years, if ever, is due to the extraordinary generosity of the London Brothers who made it possible, through the donation of one of their own, for yet another level of completeness in the expression of the Oratorian life of our distant chapter to be realized. We are not only grateful, but indebted, and if unable to repay the debt in attendance or material contribution, we will ever seek to do so through spiritual affection and prayerful devotion. Brothers, we thank you.
Posted by Fratellino at 17:26