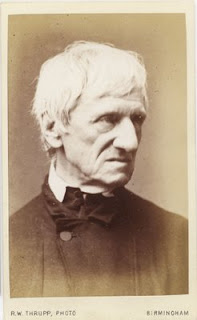 It's been a busy year for John Henry Cardinal Newman! It is no accident that a society bearing his name led the opposition to the giving of an honorary Doctorate of Law to Barack Obama a little over a month ago, in strong defense of the integrity of Catholic doctrine and its social application. Had he been alive in the flesh he could not have been more present. Then three days ago, on 3 July 2009, his first miracle approved by a board of cardinal theological consultors, Pope Benedict XVI signed the decree which cleared the way for the beatification of perhaps the most famous, and most Catholic convert to our faith in modern times.

Birmingham, England (city of the cardinal's own Oratorian congregation) has been mentioned as a possible site for the beatification, although Westminster Cathedral might be the most desirable option, as this is a beato for all England, for all the English speaking world, and for all the world in general. The great London Byzantine cathedral has a new Cardinal, H.E. Vincent Nichols, and a new, more orthodox direction: a new English beato would be the crowning glory, and the liturgy would afford a platform for projecting all three.

Is it likewise any accident that this particular saint, one of the most intellectually incisive of this or any other age, probably more prolific and philosophically influential than any recent prelate outside the late pontiff John Paul II, has had his beatification delayed for so long, until just now? Looking at the contemporary assault on the church being waged by the forces of relativism and secularism, and the burgeoning trend not of resistance, but of re-conversion within the church itself by a younger generation of hierarchs seeking the implementation of the hermeneutic of continuity, can there be any doubt as to why the Almighty has waited until now to prove his saint's intercessory efficaciousness?

Cardinal Newman is so much more than the benign "advocate for the cause of students" that the frequently banal "Newman Centers" of American secular universities make him out to be. In fact, Cardinal Newman was an advocate of specifically Catholic education and therefore Catholic students, and held forthright and unwavering convictions regarding the integrity and undeniability of Roman Catholic doctrine, and of the inevitability of conversion as a result of their rational logic. To paint him as oecumenical in the modern sense is no longer an option. This is a Roman Catholic beato to the core. 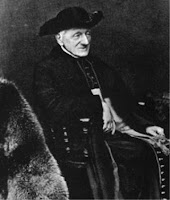 Venerable John Henry Cardinal Newman's voice is poised to echo ever louder in the face of this contemporary assault. And even though Our Lord and His vicar may save canonization for another crisis and another needful generation, the Cardinal's Oratorian sons and brothers rejoice at his renewed presence among their congregations, and in the church at large.

Soon to be Blessed John Henry Cardinal Newman, intercede for us, for Our Holy Father Pope Benedict XVI, and for the Congregations of the Oratory.
Posted by Fratellino at 17:47

Recent EWTN show with exclusive video of an interview with the Very Rev. Paul Chavasse, Postulator for Cardinal John Henry Newman’s Cause for Beatification.