A picture came my way lately, which cannot really be shared without some explanation. It shows Brothers of the Little Oratory in London serving in a habit other than that of the Brothers. It is in fact the habit of the Archconfraternity of the Precious Blood. Concurrent with enrollment amongst the Brothers of the Little Oratory in London, each member is also enrolled in this Archconfraternity. 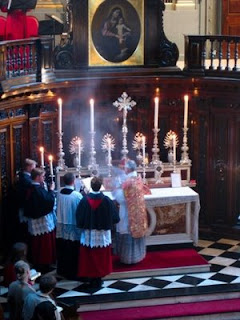 The distinctive habit of the (Arch)confraternity used mostly for public processions and watching before the Blessed Sacrament. Here from the Manual of the Little Oratory, p.3

"Processions: In all processions in the Church of the Oratory the Brothers take precedence after the clerics wearing cottas, and have the privilege of carrying the banners. The dress worn both at the Processions and Watching is that of the Confraternity of the Precious Blood, to which is is desirable that all the Brothers should be affiliated. Brothers who are able to provide themselves with private dresses are requested to do so, as only a limited number can be vested by the Father Prefect."

From the Catholic Encyclopedia: "The Archconfraternity of the Most Precious Blood refers to a Roman Catholic archconfraternity, associated with confraternities which make it their special object to venerate the Blood of Christ. They first arose in Spain. In the life of the Carmelite lay brother, Francis of the Infant Jesus (d. 1601), mention is made of such a confraternity as existing in Valencia. Ravenna, Italy possessed one at a very early date. Another was erected in Rome under Pope Gregory XIII and confirmed by Pope Sixtus V, but merged later on with the Gonfalour...

The confraternity was canonically erected by Pope Pius VII through his cardinal vicar, 27 February, 1809, raised to the rank of an archconfraternity, 26 September, 1815, and enriched with numerous indulgences. Pope Pius IX increased the privileges, 19 January, 1850, and 30 September, 1852...

In England it was erected by Fr. William Faber in the church of St. Wilfrid, Staffordshire, 1847, but was transferred to the church of the London Oratory (12 August, 1850). Previous to this it had been introduced into America by the Passionists, and canonically erected in the numerous houses and parishes founded by them after their arrival (1844)."

It is interesting then that this confraternity is older in the United States than it is even in England. Still, one wonders when was the last time its habit was seen on these shores. Perhaps, given our direct connection to the confraternity in London, we may fine occasion for a re-introduction. It is very true that tradition is about more than playing at dress-up. Still, external witness that flies in the face of worldly sensibility has definite value, and the bright red robes and black mantle of the Archconfraternity's habit loudly proclaim in public that the wearer is clothed in the Precious Blood of the Lamb, and no other. That is witness that cannot be trumped by mere vanity. It is witness we amongst the American Brothers of the Little Oratory hope someday to make.
Posted by Fratellino at 18:17

From The Life and Letters of Frederick William Faber, D.D., by John Edward Bowden (p. 273)

On the first Sunday of July the Confraternity of the Precious Blood was formally erected. This devotion had always been a favourite one with Father Faber. It was doubtless connected in his mind with the theological reminiscences of his earliest years, and on his reception into the Church the had embraced with avidity those practices of it which have been approved and indulgenced, and of which a translation recently made by an English convert was placed in his hands by Dr. Grant on his arrival in Rome in 1846. The branch of the Confraternity which he had erected at St. Wilfrid's in 1847 had had a great success, and it was a consolation to him to extend its usefulness to London, on the first celebration of the Feast of the Precious
Blood, instituted by the Holy Father on his return from exile at Gaeta. Its erection in London was confirmed by a Papal Rescript bearing date August the 12th, 1850.

Hi, how does a lay person join this confraternity in the UK ? I have found a copy of the Novena booklet adn i`d like to join my prayers with a confraternity thanks Bridie

I know that the Brothers of the Little Oratory of London are still automatically enrolled into the Confraternity. Maybe you could contact the Oratory and ask.