Some Late Postings: A Brother belatedly and informally receives his Manual, etc. 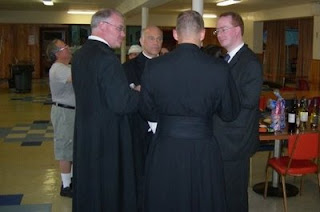 Looking at some of the photographs of the recent Oratory Week in San Diego, it occurred that several of them illustrated some scenes and events which might go uncommented upon. This scene of post-Vespers confabulation features Fr. Sean, Bishop Cordileone, Br. Rhone Lillard F.S.S.P. (back to camera) and Ashley Paver, one of the San Diego and London Brothers. Among the Brothers Mr. Paver (currently resident in Cincinatti) holds the office of Ceremoniere, and has contributed inestimably to the liturgical achievements seen in San Diego in recent years. To him, for his manifest efforts, the San Diegans offer their sincere thanks. 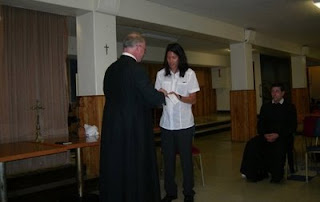 Christopher Velasco belatedly received his Oratorian Manual and collar, informally presented by Fr. Sean Finnegan at the exercizes following the Vespers of 13 July. At the time of their enrollment, the six brothers knew that they would have to wait until sufficient manuals could be printed, and collars could be made from pure linen at home in San Diego. Most of the other Brothers had already received theirs at weekly exercizes during the course of the spring. However Chris has been away tending to educational and professional matters, and had not been able to attend since returning from London. Happily, he was not only in attendance, but in choir as well for the Vespers. 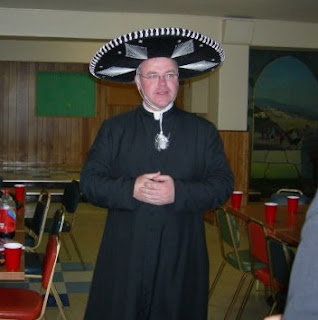 A little while earlier, Fr. Sean had been presented with our local equivilent of the Roman Saturno or "Soup-plate Hat." Trying to live up to the epithet which says that everything is bigger in America, we hope he will be seen wearing it around his parish. Now who could argue with that...or one of those?!
Posted by Fratellino at 15:49

It should be pointed out that in fact, the presentation was of the brother's copy of the Manual of the Exercizes of the Oratory, which the brothers are usually given upon their reception. Unfortunately at the Brother's reception in January, London was out of copies of the Manual, but the San Diegans had it reprinted through the auspices of LULU, the online publisher, and Chris was seen here receiving his copy. Such a presentation is not a traditional ceremony as such, and now that we have plenty of collars and manuals, it is doubtful that it will need to be repeated, but it was leant a formal air by the presence of the Bishop, a visiting priest with extraordinary background in Oratorian matters. It is a snapshot of a confluential moment, hardly the establishing of a novel tradition. In reality it was the delayed portion of Chris' London reception in January. That's all.