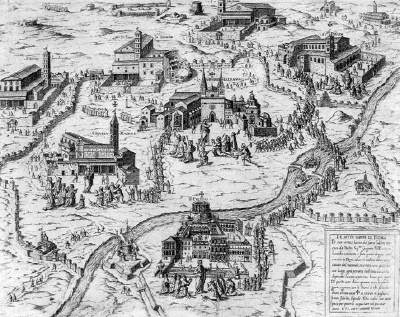 On Sunday morning, 24 August 2008, the Brothers will follow in the footsteps of St. Philip Neri and make the Tour to the Seven Churches, leaving from Holy Cross Mausoleum Chapel, and finishing later that day at St. Joseph's Cathedral.

The Brothers will offer this walking tour in a spirit of reparation for the recent outrage and desecration against the Blessed Sacrament committed in London at our own church of the Immaculate Heart of Mary, the Brompton Oratory, by an atheistic American college professor.

Rosaries will be said en-route, and prayers offered; the Oratorian exercises will be said in the afternoon, and Vespers sung informally somewhere along the planned route. It should be noted, that this pilgrimage is entirely informal, and no access to facilities can be guaranteed, but all are welcome to join in this penitential walk. The length of the walk is a little more than eight miles, but we will proceed at a deliberate pace. Bring plenty of water, and some nibbles.

The "Tour" will leave from Holy Cross Chapel immediately following the 9:00am mass, and will proceed to the St. Jude Shrine. From there the next stop will be Christ the King Parish; then over to St. Anne's parish in Sicard St.; following that, we will proceed to Our Lady of Angels, Our Lady of the Rosary, and finish in front of St. Joseph's Cathedral sometime in the afternoon. These parishes will represent the Seven Roman Pilgrim churches:

The tour of the pilgrim churches of Rome was a custom of St. Philip Neri, who led first the brothers of the little oratory, then a mixture of clergy, laity and the Roman Curia on this walk around the Seven Roman basilicas during summer Sundays from the 1550's on. At first a few, later the "Tour" came to involve Thousands, and was continued with those numbers right up to the late 1960's.

NOTE: If you plan to join us, and we pray you do, it is strongly advised to park OUTSIDE Holy Cross cemetery grounds, so that when we leave the grounds on the Tour, there will be no need to move automobiles to outside parking, just in we don't make it back to the cemetery by closing time at 4:30pm. Again, you are strongly advised to park OUTSIDE Holy Cross grounds if you are planning to make the Seven Churches Tour on Sunday, 24 August.
Posted by Fratellino at 16:17

I will be with you in spirit, and will keep you all in my prayers on retreat next week,