Vesper Photos from the Feast of the Exaltation of the Cross: The Mother-House Celebrates 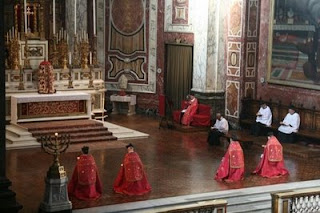 Solemn Vespers at the London Oratory is always an exemplary occaision. Even the renowned Fr. Zuhlsdorf was last week impressed by the precision of the liturgical ceremonies, and the effortless aplomb with which they are carried out. This past September 13th the London fathers celebrated solemn first Vespers of the Feast of the Triumph of the Cross. I think it fairly certain that the following photographs, taken from the loggia in the Gospel-side transept, are by Vernon Quaintance. (If I am mistaken, please correct me as soon as possible, and I'll correct the attribution.) I repost them here by way of drawing the London Oratorian manner (which is in fact based on the customs of the old Roman Basilican tradition as articulated in Baldeschi) further to the attention of both the San Diego Brothers, and to the public at large. In this first picture, the five Vesper psalms, beginning with Psalm 109 "Dixit Dominus" are being chanted in alternation with the choir and organ in the loft. 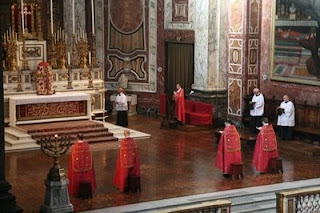 Next the Hymn is intoned, and is sung by all standing in place. 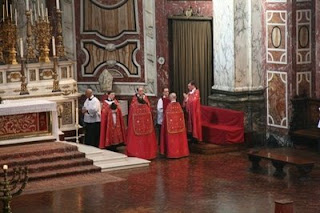 Following the hymn the hebdomadary intones the Magnificat antiphon, attended by the four assistants in cope, and the MC. Note that the acolytes are already positioned at either end of the altar, their large candles before them, prepared for the altar incensation. 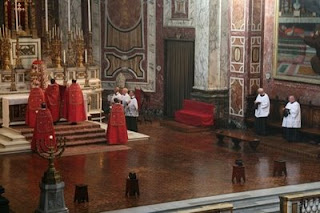 During the singing of the Magnificat the incensation take place, beginning with the altar, and passing then from the Hebdomadary through the various ranks of clergy and servers, down to the congregation. The canticle is usually rendered in a "falso bordone" setting, meaning that the twelve verses of the Magnificat alternate chant with sacred polyphony, providing a rich variety of musical texture. 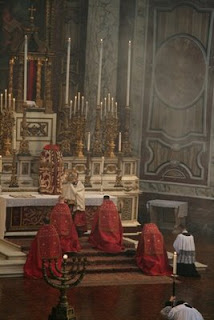 ...Benediction is given with the consecrated host in the Monstrance. 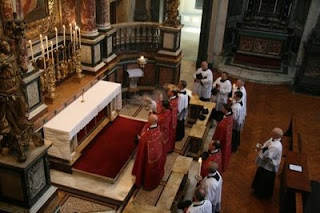 After Benediction, the recitation of the Divine Praises, and the singing of Adoremus in Aeternum, the procession goes usually to the Lady Altar in the Epistle-side transept, for the singing of the Marian Antiphon, in this season Salve Regina. On this feast in particular there is additionally veneration of the relic of the True Cross at the Altar of St. Philip. The emminant Fr. Zuhlsdorf is seen second from the right facing the altar.

Overlooking the beautiful vestments and ornate surroundings for the moment, it should be noted that what these marvellous photographs reveal, highlighted by a generously sized sanctuary, is the concise, almost sparse, and "to the point" nature of the Vesper ceremonies. Vespers is an eminantly attainable ceremony for even the most humble parish, whether one has five copes, three, or only a hebdomadary. It may be trite to imply "this too can be yours," but in fact it can. And every attempt should be made to make it so, in every parish. The terms of the Documents of the Second Vatican Council demand it, and it's time to start living up to that expectation.

To coin a paraphrase, "Got Vespers?" The Brothers of the Little Oratory in San Diego do.

I'm looking forward to doing it again in a church in San Diego!