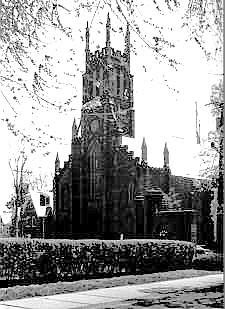 According to the website of the Confederation of the Oratory, this past 25 March a new Oratory was cononically erected in Vilnius, Lithuania. This is the first Oratory in Lithuania.

Further, the Confederation has amended its list of American Oratories to include a rather nice looking church of St. Peter the Apostle in New Brunswick, New Jersey (pictured right). This brings the total number in the United States to Eight including Rock Hill, N.C., Brooklyn, Pittsburgh, Monterey, Pharr, TX., Sparkhill, N.Y., and Philadelphia (Secular Oratory).

With the two to three formative projects which will be more fully elaborated upon in time, as well as the secular oratory of the Brothers of the Little Oratory in San Diego, the Oratory in America seems to be expanding! More profile information on these foundations and their developments as they become available!
Posted by Fratellino at 10:46