The Brothers of the Little Oratory observed St. Philip's Eve and Feast day this year according to the Extraordinary Form of the Roman Rite this year at St. Anne's Church, Sicard Street, San Diego, through the kind permission of TLM San Diego, who are currently holding weekday masses there. 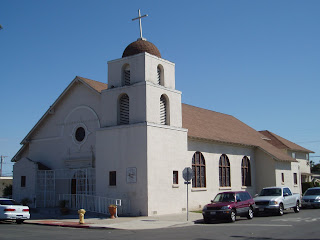 Fr. Rex DeFour, C.S.S.P. was the hebdomadary for the Vespers and Benediction. The congregation numbered approximately thirty (mostly sitting out of frame, towards the rear of the church), and included several longtime congregants of that church, which has for many years been a neigbourhood Chapel of Ease to the Jesuit run Our Lady of Guadalupe parish church some five blocks away. All expressed their delight that such services were taking place in their church. The brothers were correspondingly happy to oblige! 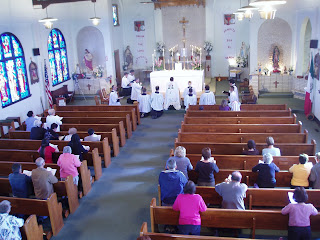 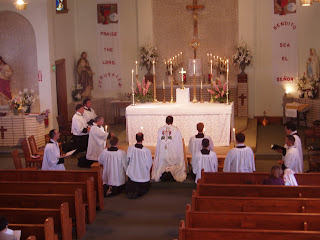 Following the Vespers, the annual Gaudeamus was held at the Polhamus family home in Pacific Beach. The festivities included a display of Oratoriana collected by Ronald Clemente; 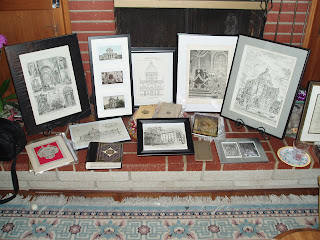 ...and the digital projection of photographs taken during the January pilgrimage to the London, during which no fewer than six new secular brothers were added through the auspices of the Fathers of the London Oratory. 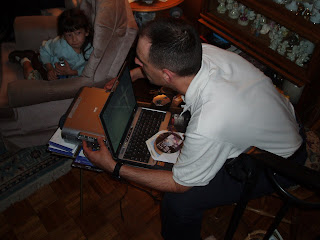 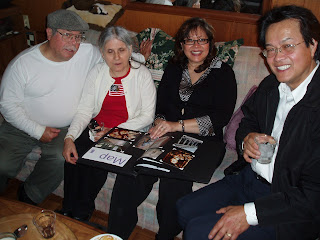 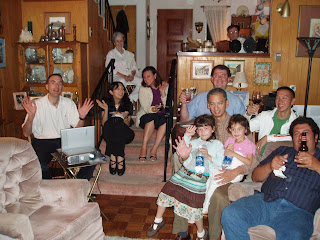 The following morning, Holy Mass in the Extraordinary Form was sung at 8:00am in St. Anne's, to a congrataion numbering sixty, helped again by the inadvertant publicity from the San Diego Union! 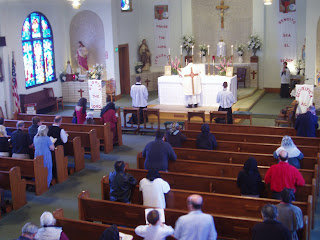 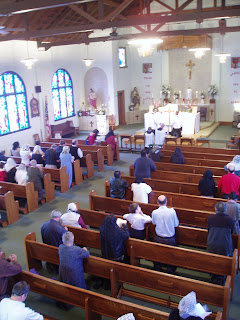 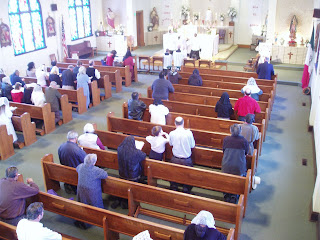 All in all, this has been a Philiptide, and a year to remember. The Secular Oratory in San Diego continues to progress and solidify structurally; we've ranged from St. Margaret's in Oceanside to St. Mary's in El Centro, to London; we've added six new brothers; we've simultanaeously sung and served for Pontifical Requiem Mass; we've sung First Vespers of All Saints, and our eighth consecutive Tenebrae to a congregation of over one hundred. In short, we have continued to expand our liturgical lives, to our benefit and hopefully that of those around us. May these activities be but a shade of things to come. 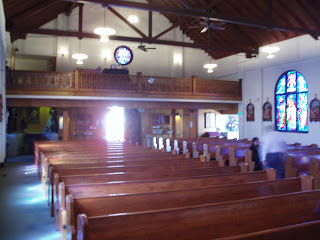 Special thanks are due to Fr. Reginald DeFour C.S.S.P., Mr. Carl Horst and the board of TLM San Diego, Mssr's Hans Mosler and David Lopez, MC's, and to the intercession of Our Holy Father St. Philip and Our Lady.

Happy Feast!
Posted by Fratellino at 15:08

Happy Philipmass to all and greetings from Fort Lauderdale! Sorry I had to rush but I really had to go. It was a really a glorious Philiptide. In list of the people to thank, I definitely include Fratellino....

Love you kids, give them Vista!

Bedwere! Glad to hear you made it to Florida safely. It was indeed a glorious weekend, and we couldn't have done it without you. There will be some more pictures to come, including the group shot, and veneration of the relic of St. Philip!

I agree with you, Fratellino is an extraordinary fellow...but remember, he couldn't do it alone. The Brothers are all equally valuable. Lets hope we get some more this year!

Steve Ballmer...hope you were there and enjoyed the services, but give who Vista...what's in Vista?

Thank you, Oratorians, for embiggening the liturgical life of Catholic San Diego.

Can I ask what inadvertent advertising was in the U-T? Did a quick search on sosd.com, and I couldn't find it.

DG: Thank YOU for being there to appraciate what we've tried to do. As to the inadvertant advertising, there was an article on Friday (or Thursday) about the revival of Gregorian Chant, and apparantly it mentioned our Vespers and Mass. I knew about the article, but hadn't seen it, and didn't know they mentioned us until after Vespers when one of the parishioners from St. Anne's said she had seen it "...in the paper." At first I thought she meant our usual advert in the Reader, but later someone told me about our mention in the UT. I'm still amazed!

A follow-up as I've found the reference: http://www.signonsandiego.com/uniontrib/20080524/news_1c24chants.html

From Saturday. Appears the events made it in as a sidebar to a syndicated column from Religion News Service about the resurgence of chant.

How odd...perhaps Sandee Dolby, the religion editor just remembered us or something...or perhaps we're becomming "known"!! Gee whiz! Either way, it was a windfall. Thanks for noticing!

Vista is lastest Windows Operating System. Steve Ballmer is the CEO of Microsoft. Although, I would be extremely surprised, if in fact, the 'real' Steve Ballmer posted here.